Is God in complete control over the evil in the world?

Whether you respond to that question in the affirmative or the negative, there are (humanly speaking) troubling implications:

1 Samuel 28-29 provide a clear demonstration of God’s ultimate control, even in circumstances and among people who are in full-blown rebellion against Him. From this portion of Scripture, we learn the Lord uses astonishing methods to preserve His plan.

The Situation: Israel Barreling Toward Anarchy?

1 Samuel has been a slow-cooking anticipation of God establishing a holy king of His own choosing. The Israelites had gotten exactly what they asked for in Saul, a king like all the other nations (1 Sam. 8:5). He’s tall, dark, handsome… and foolish. In direct contrast is God’s hand selected-successor for the throne, a shepherd named David.

From the poignant moment in chapter 16 when David is anointed, it has seemed inevitable that he would one day take his rightful place upon Israel’s throne. The only question was when. But the sense of certainty has been waning. He’s been running as a fugitive, drooling and clawing like a madman (21:13), and going to war over getting snubbed for an invitation to dinner (25:13). Most recently David has deserted to Israel’s sworn enemies, the Philistines. Not only that, but he is eagerly marching to war and putting his life on the line on their behalf and by the end of chapter 27, it seems David has fully assimilated into Philistine culture and has every intention to remain there.

We know the time is quickly coming for the kingdom to be taken from Saul. But will God’s blessing also depart from David as well?

As the Philistines (backed by David) march against Israel, Saul is petrified (28:1-5). He responds to his fear in an appropriate manner – he seeks wisdom, guidance, and strength from the Lord. But there’s a problem.

Hence, every comforting promise of God’s presence and help that you and I hold dear are rendered obsolete for Saul. He is left with only his terror and the silence of a God who had become his enemy (28:16). But Saul is a resourceful fellow, and he cleverly devises a way to work around God’s screening of his calls. He may have to break a few rules, but it just might work.

Despite God’s clear decree against such activity (Deut. 18:10-11) and his own prior political moves to eliminate them (28:3), Saul consults a medium – a person specifically in the line of work of communicating with the dead for the sake of providing guidance to the living (28:7-9). After providing her with assurance of safety and guaranteed immunity for this illegal activity, Saul convinces the medium to call up a certain VIP from Israel’s recent past – Samuel himself (28:10-14).

God wouldn’t possibly allow such evil and pagan practices to actually bring Samuel from the dead to speak to Saul! 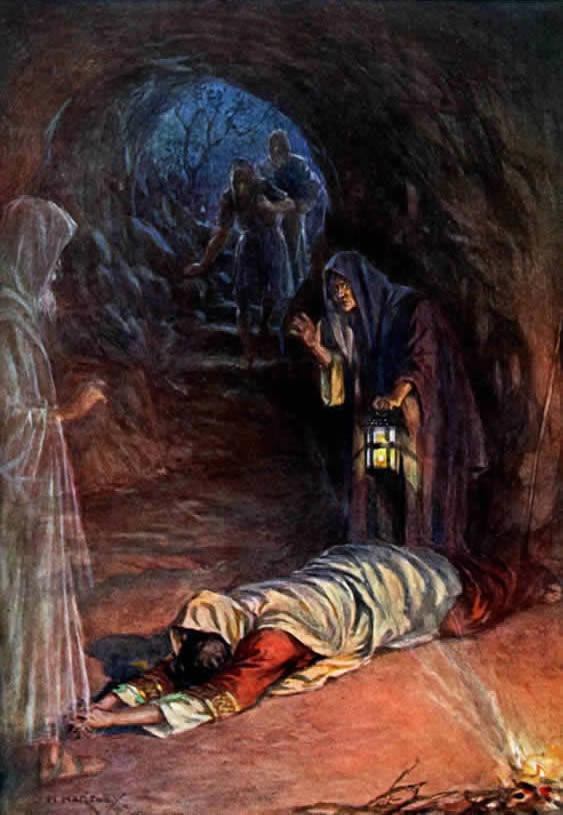 Samuel responds to the medium’s call, which hilariously terrifies her (28:12). She’s apparently not used to dead people actually hearing her! So we find ourselves in a situation where God has allowed a disobedient king to consult a pagan witch to speak to a deceased prophet – an awful lot of evil (and creepy) stuff happing at once! What is the result of this? Samuel’s words, from v. 16-19:

“Why then do you ask me, since the Lord has turned from you and become your enemy? The Lord has done to you as he spoke by me, for the Lord has torn the kingdom out of your hand and given it to your neighbor, David… the Lord will give Israel also with you into the hand of the Philistines”

Saul sought to navigate around the Lord by consulting a medium, only to run right into the same old familiar roadblock of God’s determined will against him. The Lord uses astonishing methods to preserve His plan. In this case, He used a witch calling a man from the dead to double down on the prophecy against Saul.

Meanwhile, David is marching with the Philistines as they go up to war…

Against his own people.

AGAINST GOD’S OWN PEOPLE.

David has complete commitment to the Philistine cause, total determination to oppose (and even kill) God’s people, and an intimate friendship with the Philistine king (28:1-2; 29:1-2). There doesn’t appear to be any hesitation on David’s part, and he seems all too eager to wage war against the nation of Israel.

WHY DOES IT MATTER IF DAVID FIGHTS AGAINST ISRAEL?

Opposing national Israel would have massive and catastrophic implications. Under the parameters of the initial Abrahamic Covenant, it is clear that God Himself would oppose anyone who opposed Abraham or the nation that would come from his descendants (Israel). The Lord said to Abram in Genesis 12:2-3, “And I will make of you a great nation, and I will bless you and make your name great, so that you will be a blessing. I will bless those who bless you, and him who dishonors you I will curse, and in you all the families of the earth shall be blessed.”

It is critical for David and for the future of Israel that he not go to war against God’s chosen people. As we now can see looking back on God’s fulfillment of the Abrahamic and Davidic Covenants in Christ, we know that the gospel itself required David (Jesus’ ancestor) to stay off of that battlefield.

But it is not as if the good news was every actually threatened, because we’re about to see just how far the sovereign hand of God can reach…

Does David go through with his plans to war against Israel, thus bearing a curse and disqualifying himself as their future king?

Nope! So what was it that prevented him from warring against Israel?

To the contrary, David is clearly disappointed and agitated that he cannot fight Israel and even argues repeatedly to be able to do so (29:8). If anything, David’s resolve AGAINST Israel only grows as the passage progresses. There’s no breakthrough of God’s word and no growth in sanctification that keeps David from the curse. Ultimately, it is God’s enemies that accidentally protect David from himself. Some Philistine commanders were concerned that he wasn’t truly loyal to them. Their fear was rooted in the concern that his allegiance could turn when the moment came to look his countrymen in the eye and spill their blood, that he hadn’t yet earned that level of trust (29:3-5). Similar to the sentiments of many in the United States toward Japanese Americans during WWII, these commanders worried that David could become an enemy within their own ranks.

For the most pragmatic possible reason, the Philistines simply didn’t want to risk bringing David along to fight against the Israelites. And while their suspicion at the time was completely unwarranted, the grand irony is that it was their suspicion that protected and preserved the man who would one day lead Israel to their greatest era of prestige and power (and their greatest military victories against the Philistines).

Saul was rejected, perfectly in line with God’s revealed will all along – by the means of a sinfully consulted medium seeking the wisdom of the dead.

David was protected, perfectly in line with God’s revealed will all along – by the means of a suspicious and determined group of Philistine commanders bent on destroying God’s people.

The Lord uses astonishing methods to preserve His plan. Embrace and remember this when evil abounds and surrounds you, and learn to trust Him more.