Note: Dates of events listed are at the location of the event, a day “ahead” of the U.S.

As you were still getting into the groove of your New Year’s resolutions and wondering what 2020 might have in store, the year got off to a tumultuous start. On January 3, a U.S. drone strike carried out near Baghdad International Airport successfully killed Qasem Soleimani, along with other military personnel associated with Popular Mobilization Forces.

Iran retaliated on January 8 by launching a series of ballistic missiles at two U.S. military bases in Iraq, resulting in no reported casualties.

The initial responses within the United States to Soleimani’s death were along the typical Trump fault lines. The president’s supporters praised his assertiveness and lauded a strong foreign policy of deterrence, especially in contrast to Obama’s infamous soft stance toward Iran. Never Trumpers criticized the move while expressing grave concern of escalation and unintended consequences, while questioning the legality of the operation in the first place.

There was even a stark divide in how Soleimani was portrayed, perhaps most notably in this exchange on Twitter:

We are outraged the president would assassinate a foreign official, possibly setting off another war without Congressional authorization and has zero plan to deal with the consequences.

But of course you know that. https://t.co/GzfdKilV4t

Beyond the typically red-hot partisanship that perpetually surrounds Trump were the reactions of everyday Americans. Most folks were less concerned with the political mechanicians of it all and simply hoping for a peaceful resolution. A fellow I mentored during his senior year at Troy High School, who has since joined the Marines, posted this meme:

After Iran launched missiles on January 8, an acquaintance from my time at Corban University posted to Facebook, “Praying we all get to wake up tomorrow.” There was (for a moment anyway) genuine concern of a major global conflict, especially among younger folks from across the political spectrum.

The Aftermath and What I Learned

When news of Iran’s missile launch initially got out, I sent this link with my comment to a group text with my wife and closest friends: 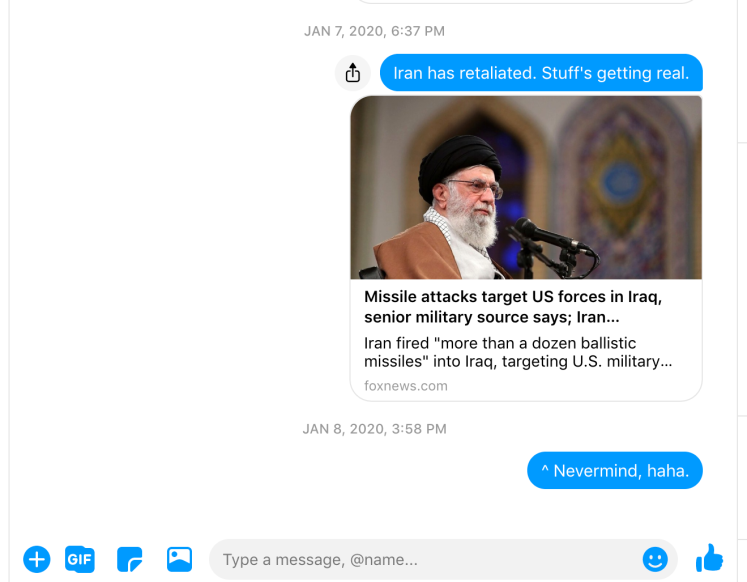 Note: For the purpose of this post, I’ll ignore the fact that I was ignored by my wife and friends… They’re wiser and less dramatic than me.

According to the earliest reports of Iran’s retaliation, everything seemed to be heading in the direction of a potentially very serious and deadly escalation. But by the very next morning, this was the official word from Trump himself:

Here we are, a bit over a month later, and…

We’re not in WWIII.

The media and everyone else moved on almost immediately to other stories. Coronavirus, the death of Kobe Bryant, Trump’s impeachment hearings, Pelosi’s speech-tearing, the Super Bowl, and the Iowa caucus debacle have each taken their turn in the national spotlight during the past month. It is fascinating (and a bit disheartening) that a widespread and genuine concern of being on the brink of a third world war can be nearly forgotten in a matter of weeks. Having ridden the roller coaster a bit myself, here are a few thoughts as I’ve had time to reflect on it all:

Be More Focused on Your Roles

In the days leading up to and following the strike, there was a team of people who needed to be 100% focused on the situation with Iran.

I’m not one of them. And you probably aren’t, either.

There’s value in being informed and aware of current events. But when it becomes a preoccupying hindrance to your actual and immediate responsibilities, it is time to disengage a bit. Our anxiety does no good. Besides, I’ve got a hunch that we humans aren’t really designed to handle the perpetual emergencies pouring in from around the globe. As Jesus asked, “Who among you, by being anxious, can add a single hour to his span of life?”

If you’re a student, focus more on the essay that’s due at the end of the week. If you’re a construction worker, consider how to use the unoccupied time of the work day to clean up the job site. If you’re a mother, spend more time praying for and with your children. Tomorrow (and Iran) have enough worry for themselves.

Look for Nuanced and Knowledgeable Voices

In the time that you DO dedicate to thinking about the news, consider looking for better sources. Whether you’re inclined to get your news from FOX or CNBC, I’d recommend taking time to find the best online resources – there is a treasure trove of better, more nuanced, and less sensationalistic news content available to you from across the political spectrum. There’s great benefit in finding the best and most intelligent representative of the opinion opposite of your own to test your position and *GASP* perhaps even learn a thing or two from someone with a different take on foreign policy than you.

A few thought-provoking reactions I came across on this topic:

Remember that Politicians are our Servants

Republicans and Democrats have equally fallen into a “sports fan” mentality when it comes to politicians from “their” side, believing they need to support their guy/gal no matter what (wouldn’t want to be a fair-weather fan, would we?). But this isn’t sports. You’re allowed to approve of decisions made by a president from the other party. You’re allowed to disapprove of decisions made by a president from your party.

Killing Soleimani was a bold and complicated decision with innumerable potential pros and cons – it was complex enough that it should have inspired more opposition from Republicans and more approval from Democrats, but that largely wasn’t the case (long live Rand Paul). If you’re a Trump supporter who loudly voiced approval for the strike, do you understand the legal intricacies of carrying out an attack against an Iranian leader in Iraqi territory? If you’re hoping with all your might that Trump’s term ends this November and believe that Soleimani should never have been killed under any circumstances, have you considered his track record of brutal war crimes?

Far too many people would have the exact opposite opinion of the strike if it were Obama calling for it. But the strike was either right or wrong, wise or foolish, regardless of whose administration is responsible.