It has officially been 100 days since you were born. Because I’m a little slow, I’m only now getting around to actually processing through our relationship. I thought I’d share it with you and those who have been praying for you now – in this admittedly strange format of a blog post that you won’t read for several years (or if I’m being realistic, ever).

Anywho, here’s a rundown of where we’ve been so far, with an eye toward where we’re going.

The Day We First Talked About You

Natalie and I met in January of 2010 and started dating in the fall of that year. In the intermediate months, we spent quite a bit of time talking and hanging out. As the mutual interest grew, we were both wondering, “Does this person want to have kids? Are they good with kids?” The answer is that we both wanted kids and that only she is good with kids – as I’m sure you know by now!

During a multiple-hour progressive date when we finally made our relationship official (whatever that means), we were already having conversations about kids and parenting and nurturing, etc. At that time we had no idea if our relationship would work out or if we’d end up together, but it was clear from the beginning that children would be a priority for each of us. Crazy now to realize that those two awkwardly flirtatious kids on the balcony at Corban University were talking about you – born just about eight years later.

The Day We Learned that You Existed

We were married in the summer of 2012. But we weren’t in a hurry to have kids. Natalie and I had a LOT of learning to do in marriage. The adjustments of living together, communicating well, planning as a unit, and cooperative budgeting come naturally and gleefully for some – but that was not the case for us. We needed several years to grow together and learn how to work well together (a big shout-out to our friends in Portland who put up with those “tense” moments between us).

That morning in February 2018, Natalie took the test in the bathroom and came out to say, “I’m pregnant.”

I had wondered about this moment for a long time – how would I handle it if we were unable to conceive? What would I do if there was a massive complication in the process? What kind a celebration dance would I come up with if we were able to get pregnant? But when that moment came, there was a solemnity of responsibility that overwhelmed me to the point of tears. In silence, we simply embraced and prayed for your safety.

The Day We Found Out That You Were A Boy

By the time you’re old enough to read and comprehend this, you’ll likely know that I enjoy surprises while your mom wants as much information as possible. So naturally, I wanted to wait until you were born to find out your gender while Natalie wanted to find out ahead of time… she won, haha.

The day we found out, our primary concern was actually in seeing if you had inherited my cleft lip and palate. The technician verified that your mouth looked fine, and then said, are you ready to hear what your child is?

By then I had already spotted what I was fairly certain was the, uh, evidence of your gender. So I wasn’t completely surprised when she said that you were a boy. But it was a pretty cool moment nonetheless. Of course, I had to share with everyone the epic picture of you flexing your muscles for the camera!

The Day We Named You Jason

Your name doesn’t have any sort of massive significance or deeply philosophical meaning. Natalie and I simply gave each other “veto” power of any name suggestions, and I had as a standard prerequisite that we wouldn’t give you some hippie millennial name.

We went back and forth and round and round a bunch of times and were slowly narrowing in on a few ideas. Then we did what every resident of Troy should do during the dog days of summer – go up to the Yaak Falls and play in the river with a fun group of friends. We did, and then took a spontaneous drive over to Bonners for dinner. As we waited for our food with Danny and Alanah, we just decided.

The Day We Met You

Natalie woke me up that day at 4:00am and said it was time to go. We were off to Libby. I made a few calls to make sure things would run smoothly at church that day, and then it was hurry up and wait. Things went fairly smoothly throughout the day (including a Minnesota Vikings victory and some dear friends bringing us lunch) as we waited for you to come along enough for Natalie to start pushing.

She pushed from 4:00-6:00pm, which was pretty intense. For your sake and hers, I’ll spare you the details. The whole time you had a whole army of folks from all over the place praying for your safe arrival, along with an exceptional medical team providing Natalie with wonderful care (not to mention your grandparents making the 8-hour drive from Billings to Troy as soon as they heard you were coming).

At 6:00pm on the button, you were born. I immediately melted into tears. It was impossible to comprehend that you were actually there. It wasn’t long before a large cadre of your support system came filling the room – and they brought PIZZA!

You’ll never remember that day, but I’ll never forget it. 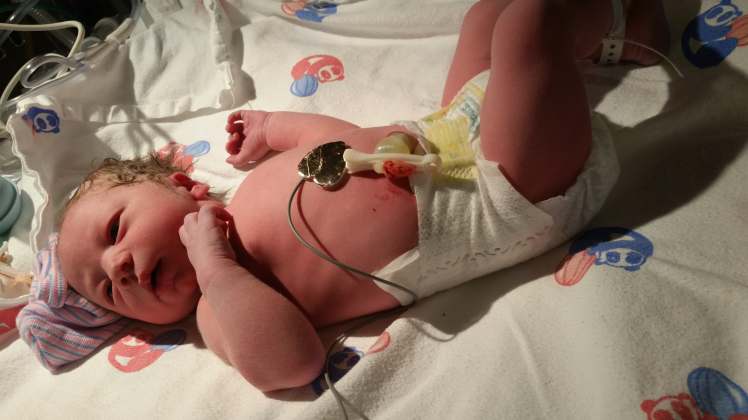 It has been a very FULL 100 days since you were born.

The day after you came home, we had to take you and Natalie to be readmitted to the hospital for an additional three days because she had signs of preeclampsia and you had jaundice.

I felt completely helpless and hopeless as a father on more than one occasion, not sure how to care for or love you at this very early stage.

We’re still figuring out how to fulfill all of our roles well in this “new normal” as I regularly seem to fail in at least one when trying to carry out the responsibilities of the others (between husband, father, pastor, friend, brother, son).

Your grandpa had a quadruple bypass surgery on January 8 in Billings, which was the unfortunate catalyst for your first road trip. All things considered, you handled yourself quite well as we sought to support your grandparents during that trial.

My favorite moments with you involve simply watching as you lay there, kicking up a storm and giggling (sort of) all the way. It has been a joy to see the first glimmers of your personality emerge, and to see the way your mom has really come into her zone in raising you and caring for you. 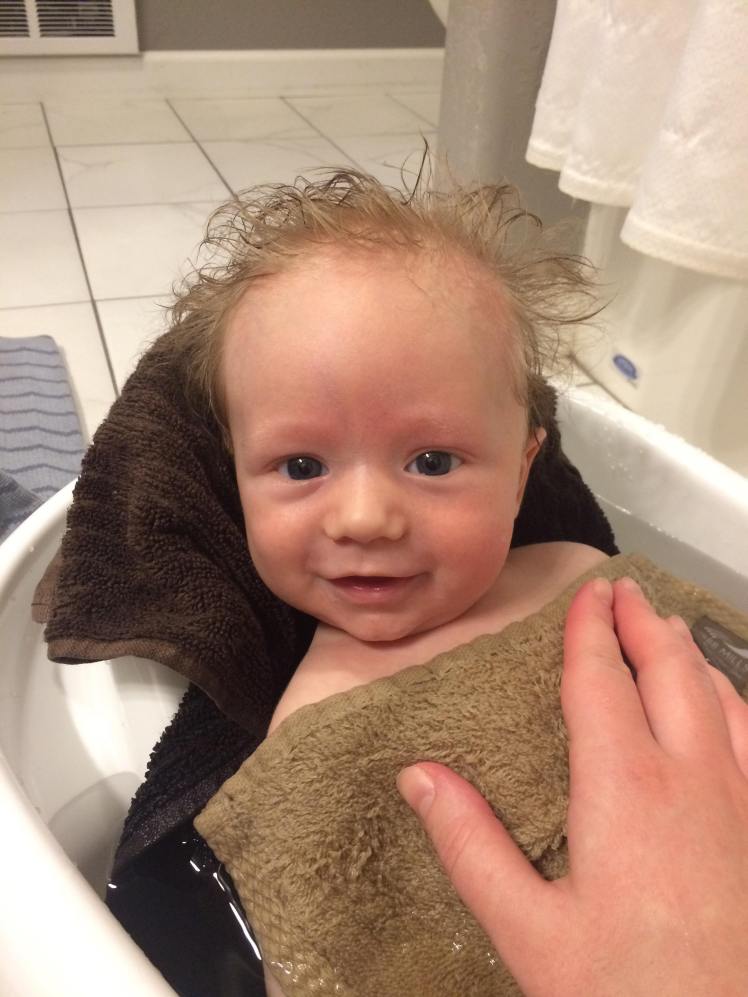 We pray for you every day, and ask that the goodness, glory, grace, and holiness of God would be made known to you. We hope that you see the gospel of Christ lived out in everyday life within our home and through the wonderful people of our church. We hope that you go through life with joy, excitement, wonder, curiosity, discernment, conviction, and courage. We love you very much, and cannot wait to continue getting to know you more and more. 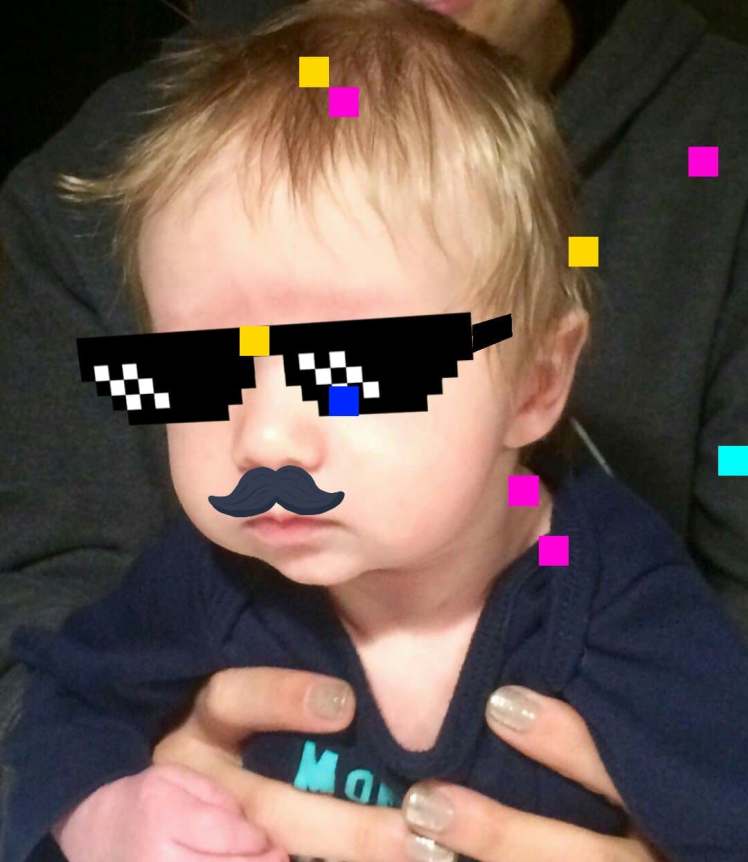